Okay, folks, the people at the IPCC tell us that the world has twelve years to cut carbon emissions in half. Sounds like you and I need a plan. So, here’s a Climate Defender’s Calendar. Of course, we have to do all these things, all the time, forever – but this might help get us organized. 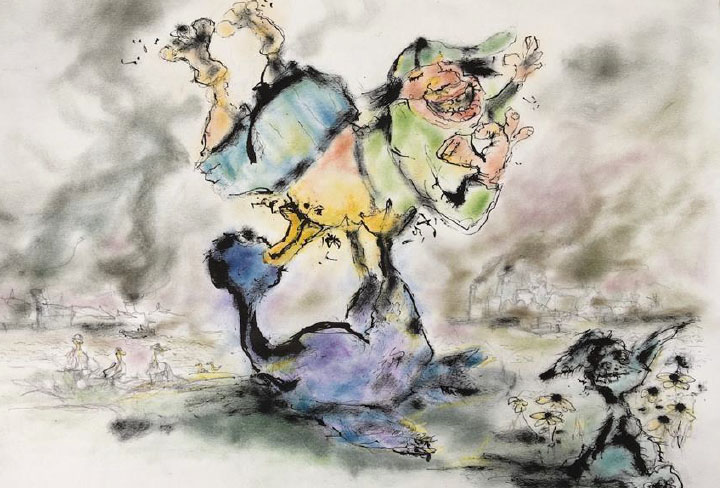 In the long tradition of battle, we will begin with self-purification. Basically, you just have to make sure you’re not fighting for the wrong side, a dutiful foot-soldier in the war against the world. So this is the year to dump all investments in fossil fuels, stop eating meat, save a chunk of Arctic ice the size of a minivan by cancelling your international eco-tour, tithe to environmental justice organizations that don’t take oil money, and make sure that all your electricity comes from renewable sources.

Be clear: the world is not fighting climate change. The world is fighting those men (they are men and they are villains) who are blocking the world from implementing the changes that will restrain climate change. They are doing this for cold, hard cash, what we used to call “bribes”. This is the election in which you become a one-issue voter: It’s the Climate. Give your all to the brave climate-friendly politicians who promise to stop subsidizing fossil fuels and put a true price on carbon. Identify the oil-soaked pols, their pockets stuffed with dark and dirty money, and hold their feet to the fire. This is your one and only duty this year. Everything depends on it, and that is not an exaggeration.

There’s a fun way and a not-so-fun way to spend the year of the tree. The fun way is to plant trees obsessively, everywhere, preferably with a bunch of kids – in your front yard, your churchyard, the lawn at the old folks’ home, the prison yard, the school yard. Especially the school yard; the kids don’t need a jungle gym, for God’s sake; they need a forest. The planet needs 3 billion new trees, not one fewer, to suck up carbon dioxide. Less fun, but surely more important, is to protect the forests and grasslands that remain. Join up with the organizations that are supposed to be doing this, and straighten their spines. Their tools will be taxes and subsidies and lawsuits, yes, but also moral outrage. Stand in the threatened forest with a choir and a conscience. Actually, that sounds fun too.

You want to know something gross? Of the biomass of mammals on this planet, 4 percent are wild animals, 36 percent are human beings, and 60 percent are cows and other livestock. That 60 percent is belching and farting up a methane storm and grazing on the burnt remains of rainforests. By now, you are of course a vegetarian, so your work turns to making the whole world hostile to cows and other bloviating things. Does this mean political action to stop destructive subsidies and replace them with hefty taxes? Yep. Join up with others on this one; good, creative work is happening all around the world to help ranchers find a better way. And in your spare time, hang out at the meat counter and shame customers.

You could organize a campaign to put solar power on every school in your town. You could organize a community solar project for your neighborhood. But why would you, when you could spend this year (remember, there are only seven left) enacting laws that require every new building to be energy-neutral and providing negative and positive incentives for doing the same for existing buildings? We’ve got to scale up, people. We’ve got to work as hard to block coal and natural gas power as the thugs are working to block renewables. Harder. Greed will actually help us on this one, since renewables are now far cheaper than coal. Yay, greed.

2024. The Year of Another Election

Oh dear God. Okay. As Barbara Kingsolver says, “If you run out of hope at the end of the day, get up in the morning and put it on with your shoes.” So our work, the hard work of the entire year, is to elect people who will make bribery and corruption illegal again. That’s the only way to wrest the government from the grip of corporate control and force it to protect the rights of present and future beings to life, liberty, and security of person, which is, actually, its job. (Remember, “that to ensure these rights, governments are instituted among men…”?). By now, you are old pros at political action, and you know what to do. Just do it harder.

And on the seventh year, we rest. This will be a time to give thanks for the great gifts that the reeling world continues to provide. We blighters don’t deserve fresh water and clean air and nourishing food, but the poor old Earth keeps on working to give them to us, although its back is blistered from the sun and half its fingers are missing.

By this year, it will be manifestly clear that everything we have done is not enough. By now, the world will need to be deploying a hundred, a thousand, different technologies to pull carbon dioxide out of the air. That’s okay; the human intellect is endlessly inventive. That’s how we got into this mess. This year, the great work will be to invest in, speak out for, lobby for, insist on, demonstrate for, write songs in celebration of the Great Sucking. And, in your own backyard, install the best carbon-sequestration machines the world has ever invented (see 2021, above).

Now that we have reduced the planetary biomass of cows, we can turn our attention to the world population of humans, which will have reached 8,334,801,643. To feed ourselves, we’ve been destroying habitats and the creatures who live there, driving them to extinction; we are in effect turning 150 species a day into human fat and gristle. So, sorry: no sex this year, no new babies. There is a good side to this: it will give you lots of time and energy to do everything you can to educate women, empower them, provide them with the information and the medical care that will give every woman control over her own body and her own fate, for the first time in the history of the universe. Sheesh.

2028. The Year of Another Election

This is the year that the number of climate refugees is predicted to reach 150,000,000 – people driven from their homes by thirst and starvation caused by global warming. Or maybe their homes are submerged by sea-rise or blown to slash by hurricanes or burned to ash. They didn’t do anything to deserve this. They just happened to be on the wrong continent, at the wrong time, bearing the consequences of the North’s profligate and disdainful use of fossil fuels. Damn. One might say, then, that this is the year of compassion, opening our hearts and homes. But actually, it’s not. This is the year of justice, when our work is to reach out to those we have harmed, to create meaningful programs of recompense, resilience, and restorative justice.

Time’s up! This year, we will celebrate meeting the deadline set by climate change. We will load the table with lemons and warm bread. We will sing old “Peter, Paul, and Mary” songs. We will gather the small children around our arthritic knees. In their sweet voices, they will say, “I guess we don’t hate you after all.” We will weep in exhaustion and relief. Their small arms will embrace us.

“What can YOU do about climate change? Take this quiz to find out” is now available in English and Swedish at Yale Climate Communications. If you’ve ever said, “I want to help in the climate struggle, but I don’t know what to do,” here’s a key to your answer. Click here.