Oh no. Not the Pogo Fallacy again.

We have met the enemy and it’s not us, says Occidental Petroleum’s CEO. It’s YOU. But here’s why blaming oil and gas consumers for climate breakdown is bogus. 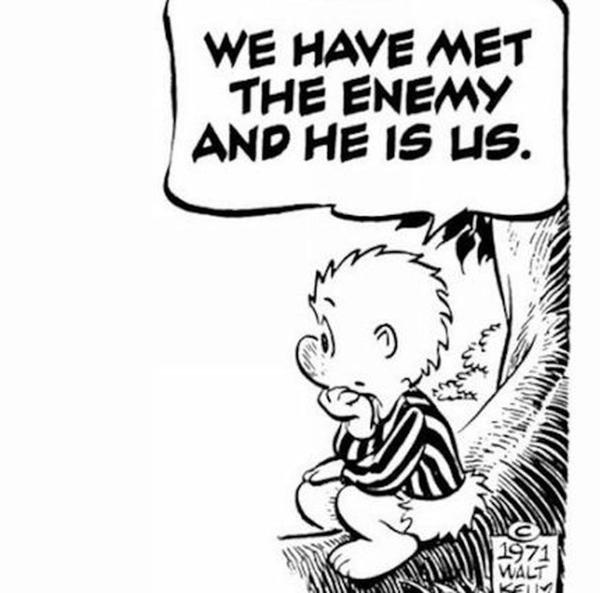 At the COP27 meetings in Egypt, Occidental Petroleum CEO Vicki Hollub attempted to shift much of the blame for climate-destroying carbon emissions from the oil and gas industry onto the consumers who use their products. “Everybody that uses a product that was generated from oil and gas has a part in this and is also responsible,” she said. “If you flew over here, you are responsible for what you used here. The nice clothes you are wearing right now, you are responsible. Don’t ask me about oil and gas…”

I am thoroughly sick of this bogus argument. Every time I give a public talk about the need to put the brakes on the oil and gas industry, I get the same self-silencing comment: We don’t have the moral authority to criticize the oil and gas industry, because we are burning oil and gas in our cars, furnaces, jet engines. The argument is fallacious — a nasty non sequitur (Latin; literally, “it does not follow”). And yet it has a terrible staying power. Can we, today, while oil and gas company earnings and global fossil-fuel emissions both set all-time records, finally put this argument to rest?

I first heard the just-blame-me argument from a little opossum in a bent stove-pipe hat. On the first Earth Day, 1970, Walt Kelley published a cartoon showing a porcupine chatting with the opossum, whose name was Pogo. “Ah Pogo,” says Porkypine, “the beauty of the forest primeval gets me in the heart.” The frame pulls back to reveal that the forest is filled with junk. “We have met the enemy,” says Pogo. “And he is us.”  And so, for fifty years, we have been Pogo-ized, lured into blaming ourselves for problems that are systemic and highly profitable.

It may be one of the biggest triumphs of Big Oil, to make customers blame themselves for burning fossil fuels, even while the corporations are spending billions to trap consumers into a fossil-fuel economy where they have few non-polluting options. It’s a clever business plan: create dependence on fossil fuels, earn a fortune selling their products, and then blame the buyers. It’s the business plan of heroin dealers. Except that heroin dealers aren’t taking down the world.

Let us ask Ms. Hollub, why are there no alternative modes of transportation to the meetings in Egypt? Why are even clothes a petroleum product, made of plastic from milk jugs? How has the oil and gas industry created a society that is utterly dependent on fossil fuels?

The fossil fuel industry is very happy to claim that it is simply responding to public demand. But it has, in fact, cleverly created that demand. They convince politicians to kill or lethally underfund alternative energy or transportation initiatives. They spend 1.4 billion dollars over the last ten years to convince the public that we can’t live without fossil fuels. They increase demand for energy-intensive products through advertising. They create confusion about the harmful effects of burning fossil fuels. They influence elections to defang regulatory agencies that would limit Big Oil’s power to impose risks and costs on others. They convince legislatures to impose terrible criminal penalties on anyone who objects. BP even sent out the carbon footprint calculator, so consumers could calculate exactly how much they are to blame. They do everything they can to be sure that people have no choice but to participate in the oil economy.

Of course, in every way we can, we should refuse to let Big Oil conscript us as foot-soldiers in its deadly and explosively profitable war against the world. That means moving forcefully into renewal energy, alternative transportation, and plastic-free markets. Of course, negotiators at COP 27 should spurn oil and gas lobbyists’ attempts to broker agreements that would solidify its illicit gains and forestall efforts to force a withdrawal from the territory it has gained by force, lies, money, and unholy alliances with corrupt governments, including our own.

We have met the enemy, and I am going to do everything I can to make sure it isn’t me. But while the oil industry is externalizing the costs of pollution and global destruction onto me and all the world’s children, I will not allow it to externalize its shame.

“What can YOU do about climate change? Take this quiz to find out” is now available in English and Swedish at Yale Climate Communications. If you’ve ever said, “I want to help in the climate struggle, but I don’t know what to do,” here’s a key to your answer. Click here.