Polar bears on the Svalbard ice sheets. The photo is a gift from Kathleen’s dear friend, photographer Kim Heacox. 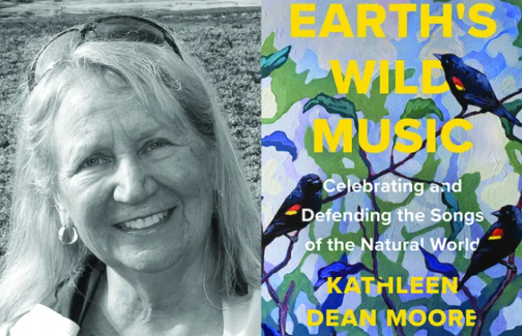 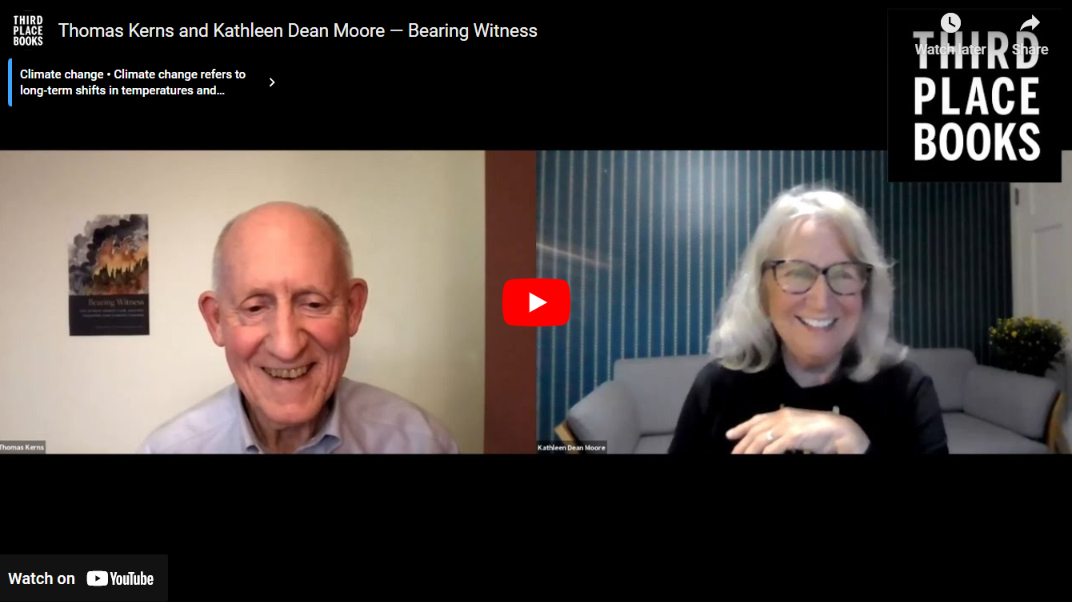 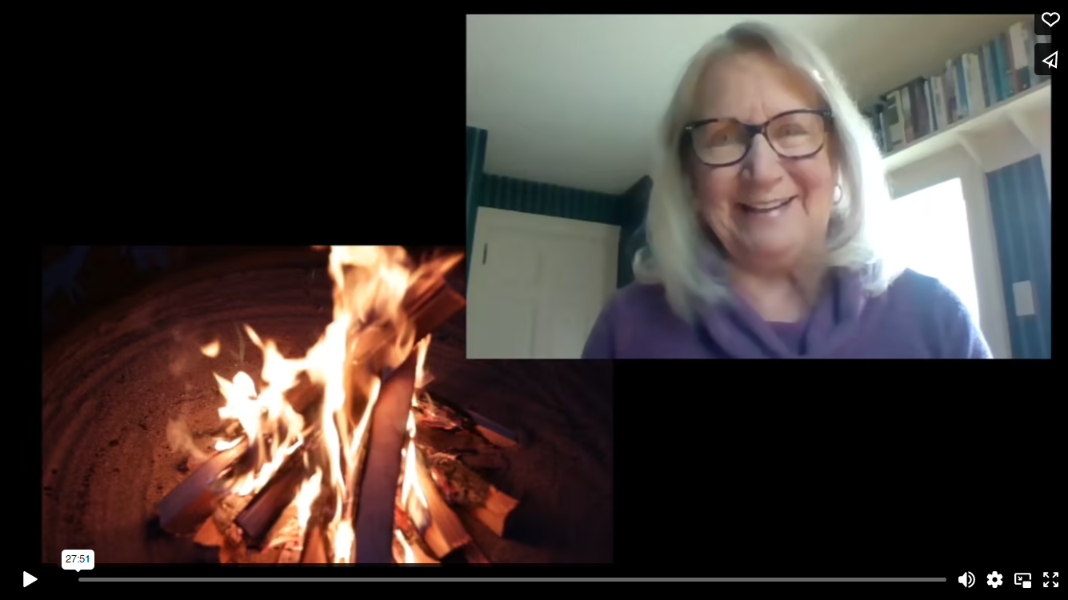 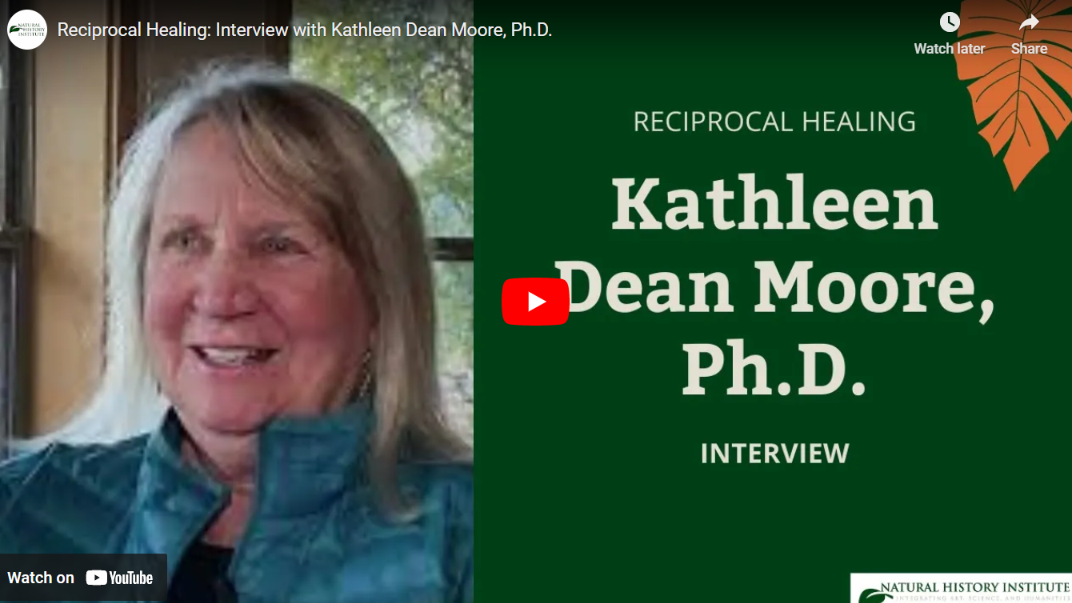 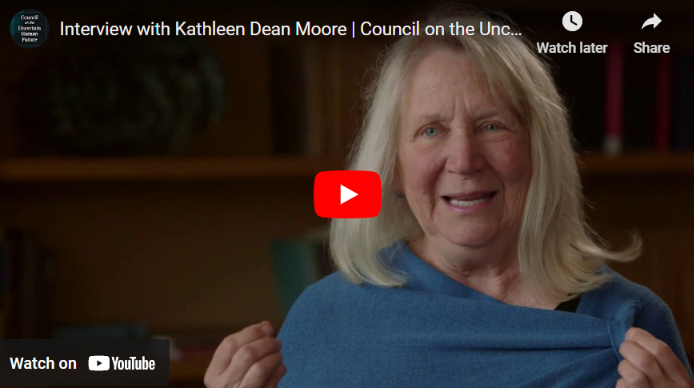 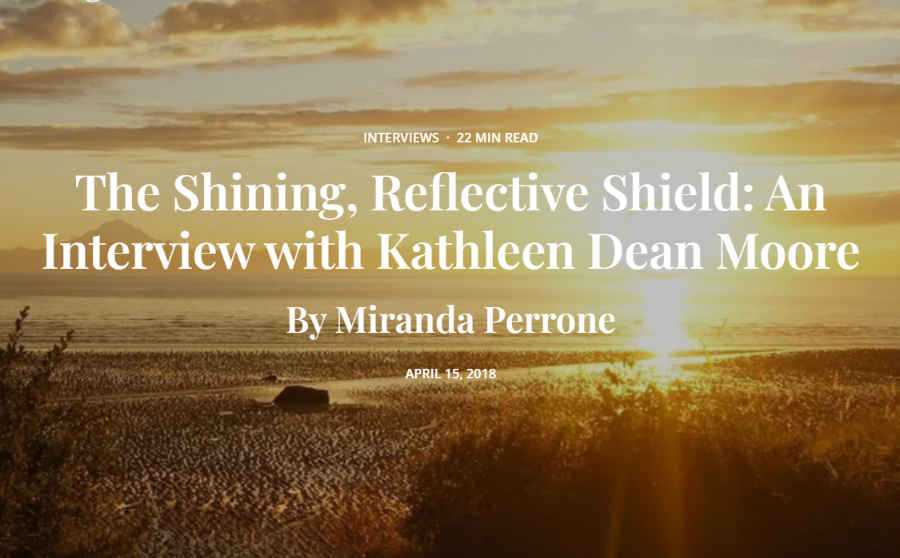 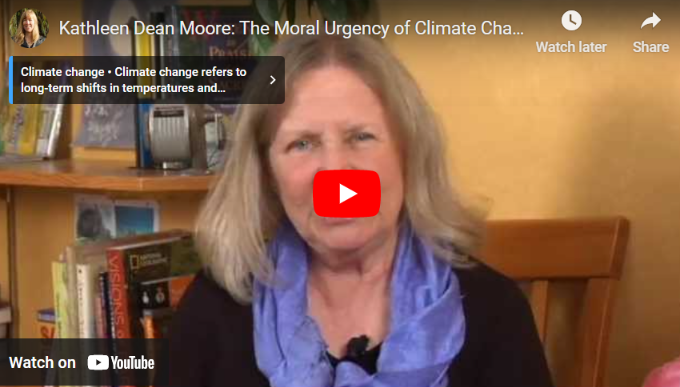 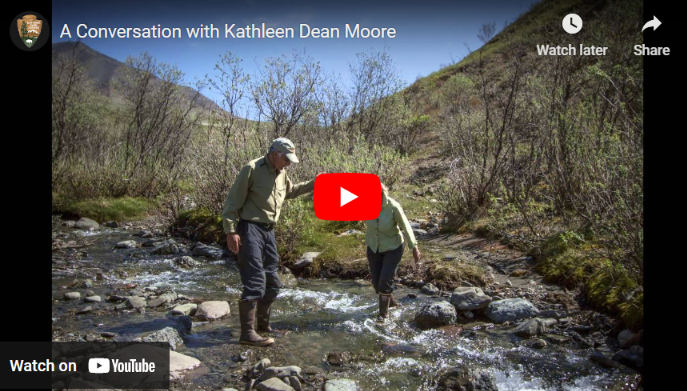 “The Language of Trees: A Conversation with Alison Hawthorne Deming and Kathleen Dean Moore” with MaryEvelyn Tucker, Yale School of the Environment (April 2022)

“Barns Burnt Down” Creatively United for the Planet (May 2021)

“What Role Can Imagination Play in Our Efforts to Achieve a Sustainable World?” Bifrost Online (Aug 2018)

“What are your thoughts on E.O. Wilson’s Concept of Biophilia” Bifrost Online (Aug 2018)

“How Do Present Environmental Crises Demand a Reframing of Our Own Perspectives?” Bifrost Online (Aug 2018)

“What Gives You Hope We Can Find a Way Out of Today’s Environmental Crises?” Bifrost Online (Aug 2018)

“What is the Knowledge-Deficit Theorem and How Do We Overcome That Fallacy?” Bifrost Online (Jun 2018)

“Questions for a Resilient Future” Center for Humans and Nature (2014)

In the book launch event for Take Heart: Encouragement for Earth’s Weary Lovers, author Kathleen Dean Moore and illustrator Bob Haverluck join in conversation about how to keep showing up and doing good work for the world. The book offers not another to-do list or empty promise of hope, but courage, and deep and honest reasons to remember why the struggle matters.

This event marks the publication of a paradigm-shifting book, Bearing Witness: The Human Rights Case Against Fracking and Climate Change, edited by Tom Kerns and Kathleen Dean Moore.

Drawing on recent rulings from an international human rights court, the book argues that climate change, and the extreme extraction techniques that fuel it, directly violate rights guaranteed by international law. Further, governments are in deep collusion with oil and gas companies, abdicating their responsibilities to protect the rights of their citizens.

During this virtual book launch, the co-editors are joined in conversation by several special guests:

Earth’s Wild Music: Celebrating and Defending the Songs of the Natural World

Kathleen Dean Moore is joined by special guests to launch her new book: Earth’s Wild Music: Celebrating and Defending the Songs of the Natural World. The event includes music, video, and sound clips. Special guests include:

Bedrock Rights: A New Foundation for Global Action Against Fracking and Climate Change

Produced by the Spring Creek Project at Oregon State University, with production and videography by Fire+Bird Films.

The documentary film “Bedrock Rights: A New Foundation for Global Action Against Fracking and Climate Change” explores how fracking and climate change violate human rights. According to the findings of an international human rights tribunal, the violations include the right to health, the right to clean water, the rights of Indigenous people, and the right to information and participation.

Climate change is of course a scientific and technological problem, but it is fundamentally a problem of environmental justice. Learn how a rights-based argument can empower new global action against fracking and climate change.

Filmed on the concert stage and in the Pacific Northwest’s landscapes of coastal tidepools, volcanic fields, and clear-cut mountainsides, this film is a moving call to action on climate disruption and mass extinction. In a unique creative collaboration, classical pianist Rachelle McCabe’s performance of Sergei Rachmaninoff’s “Variations on a Theme of Corelli” weaves through essayist Kathleen Dean Moore’s words, carrying them from despair to bewilderment to hope and moral resolve. Scriptwriter, Kathleen Dean Moore; Nara Garber, filmmaker.

Music to Save Earth’s Songs

“Music to Save Earth’s Songs” is a series that features excerpts from Kathleen Dean Moore’s book Earth’s Wild Music: Celebrating and Defending the Songs of the Natural World (Counterpoint Press, Feb. 2021). It includes three public keynote events as well as 20 tiny concert videos called Animal Interludes. Each video, just a few minutes long, is an original composition of words and music in honor of a threatened or beloved animal. For example, Robin Kimmerer reads a passage from Earth’s Wild Music about seabirds, with a string duet. Lauret Savoy reads about sage grouse, accompanied by Mark Weaver playing tuba. Aimee Nezhukumatathil reads from an essay about meadowlarks, with an original flute composition by Jane Rigler.

The series is hosted and produced by the Spring Creek Project at Oregon State University and co-sponsored by the Center for Humans and Nature, Counterpoint Press, Greenbelt Land Trust, McKenzie River Trust, Orion Magazine, and The Safina Center.

Raven read by Aimee Nezhukumatathil with music by Brian Elyo

Meadowlark read by Aimee Nezhukumatathil with music by Jane Rigler

Albatross read by Jane Hirshfield with music by Rachelle McCabe